He makes me so nervous. 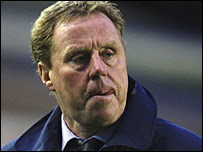 Now we know what you've been doing and why you twitch!!!!!
Posted by Gorseinonboy at 1:50 PM No comments:

BBC SPORT
Posted by Gorseinonboy at 1:50 PM No comments:

Jose Mourinho is ready and willing to talk to the Football Association about becoming the new England manager.

The former Chelsea boss has emerged as the fans' favourite to take over the reins from Steve McClaren, who was dismissed last week after his failure to lead England to the Euro 2008 finals.


FA chief executive Brian Barwick is set to begin his hunt for England's new boss within the next week - and Mourinho admits he would welcome an approach.


"You will have to speak to the FA to see if they are interested in offering me the job," he told The Sun.


"I cannot say what I think until they say they are interested. Tell the FA to come and get me.


"We will have to wait and see, but I rule nothing out."
Posted by Gorseinonboy at 11:44 AM No comments:

Swans get a great away result

Tranmere 0-1 Swansea
A late own goal was enough for Swansea to beat Tranmere.
The game was a closely fought affair with the better chances falling to the home side, who were initially frustrated by keeper Dorus De Vries.
Calvin Zola, Chris Greenacre, Ian Goodison and Shane Sherriff all then wasted gilt-edged chances for Rovers.
And they paid the price when Steven Jennings was unlucky to turn an Andy Robinson cross into his own net in the 81st minute.
Posted by Gorseinonboy at 12:39 PM No comments:

McClaren ~ Who was the mincepie who appointed this pudding????

Where it went wrong for McClaren
Feature: A look back at McClaren's tenure
By Phil McNulty Chief football writer
The Football Association has drawn a very thick line under Steve McClaren's reign of error following England's failure to qualify for Euro 2008.
When England needed inspiration from the sidelines, all they got was a man keeping his hair dry with a brolly
The under-whelming, expensive, spin-driven reign of a man promoted out of his depth to fatally guide England's football fortunes ended on Thursday when the FA board handed him his P45.
From day one, it was an appointment that had the pungent smell of compromise and eventual failure about it.
McClaren was Sven-Goran Eriksson's henchman in the under-achieving years of what we now know to be the laughingly-labelled "Golden Generation" of English talent.
The hand of McClaren was on the body of England's failures at major tournaments - so he was never the man to succeed the Swede.
And yet, with a curious mixture of accident and very little design, he breezed into London as England's new coach on 4 May last year.
Chief executive Brian Barwick drew mockery when he proclaimed he had landed his first choice, particularly after a very public courtship of Portugal coach Luiz Felipe Scolari had ended in an equally public rejection.
606: DEBATE
It was an inauspicious start for a man very few actually felt was right for the post.
McClaren did not distinguish himself at Middlesbrough, even being pelted with a season ticket by a supporter despite subsequently leading them to the Uefa Cup final, where they were thrashed by Sevilla.
No tears were shed on Teesside when he left, but grumbles were heard when it was suggested Martin O'Neill's failure to produce a dazzling power-point presentation or show due deference to potential employers had ruled out the most obvious candidate to go before the FA.
McClaren was never liked by English supporters, and even his appointment of Terry Venables as right-hand man smacked of an attempt to get a few media pals onside rather than a neat managerial fit.
He was too much style and not enough substance. He did not enjoy a good public image, with too many syrupy pre-rehearsed soundbites and a well-manufactured smile that was not well received.
Even in his last hours, he "inspired" England's last-ditch bid to reach Euro 2008 at Wembley from underneath an FA umbrella, an enduringly stupid image that will haunt him for a very long time.
When England needed inspiration from the sidelines, all they got was a man keeping his hair dry with a brolly.
After an acceptable start the cracks started to show with a disappointing goalless draw at home to Macedonia, followed a calamitous tactical shift to 3-5-2 in Croatia that led to confusion and a 2-0 defeat.
He was unable to make England's talented but unbalanced midfield work, with Frank Lampard and Steven Gerrard unable to deliver, with only the introduction of Gareth Barry giving hope for a while.
England scraped a 3-0 win against Andorra in Barcelona, but the actual performance was right down there with the worst in recent memory.
There was a run of wins, with a 3-0 beating of Russia the highlight, but McClaren's England bandwagon never truly gathered momentum.
The whole campaign had a stutter and stop-start feel about it that meant McClaren rarely presented a convincing case that he was a long-term bet for the job.
And then there was the David Beckham selection hokey-cokey. From showpiece axing to eventual recall.
In-out-in-out - all the way out of Euro 2008.
McClaren did suffer ill-fortune with injuries, the kind which ruled out John Terry, Wayne Rooney and Michael Owen from the final game.
And being unlucky was another problem McClaren did not need among the others he brought on himself.
McClaren's final 4-5-1 format for his last defeat against Croatia was not necessarily a bad option, but it was applied in a naïve, almost Neanderthal manner which suggested little thought had been given to the game plan.
Peter Crouch was fed a constant diet of aimless long balls in that nightmarish first 45 minutes, when the formation could have produced much more imagination if McClaren had chosen to suggest it.
Instead of looking like they had received a measured message from their leader, England looked scared, negative, basic, desperate - and horribly lacking in technique compared to Croatia.
McClaren's big goalkeeping call of replacing Paul Robinson with Scott Carson went badly wrong after only eight minutes when the youngster made an amateurish hash of dealing with Nico Kranjcar's long-range shot and England were on the road to ruin.
The FA, for its part, also needs serious censure for settling for second-best and making what actually was an appointment of convenience and compromise rather than quality.
Its top brass can reflect on that at their leisure today and all through next summer as they contemplate the riches they miss out on as soccer's showpiece takes place without them.
And also while they negotiate what will presumably be a handsome pay-off for the so-called "first choice" coach.
For McClaren, we can reserve one of his favourites phrases - "we move on" - as a parting shot.
And the FA has made sure it has done so.
Story from BBC SPORT:http://news.bbc.co.uk/go/pr/fr/-/sport1/hi/football/internationals/7106870.stmPublished: 2007/11/22 07:43:19 GMT© BBC MMVII
Posted by Gorseinonboy at 2:31 PM No comments:

At Last ~ the puddings gone.
Posted by Gorseinonboy at 1:42 PM No comments:

Jose Mourinho and Martin O'Neill have emerged as frontrunners to succeed Steve McClaren.
McClaren's reign in charge of England has come to an end following the failure to qualify for Euro 2008.

A miserable night for McClaren and his men ended in defeat as Croatia outplayed England to stun the Wembley crowd, securing a 3-2 victory.

SkyBet.com have former Chelsea boss Mourinho ranked as 7/2 favourite to replace McClaren, however the Portuguese tactician has previously stated he would only be keen to manage his home nation.

Meanwhile, Villa manager O'Neill is at 9/2 but spoke Wednesday - prior to England's exit - branding rumours of him taking the reigns as 'complete nonsense'.

Former FA target Luiz Felipe Scolari is ranked at 8/1, while Alan Shearer is rated as having an outside chance at 12/1.
Posted by Gorseinonboy at 1:41 PM No comments:

How to be English.

Posted by Gorseinonboy at 1:19 PM No comments:

I've been writing quite hard in the last week and I'm now up to:

Postings Suspended until end of November